The Eastern Mediterranean and Middle East Climate Change Initiative (EMME-CCI) was initiated in March 2019 by H.E. the president of the Republic of Cyprus and has matured into an ambitious scheme striving to coordinate a concerted effort by the countries of the region to address the climate crisis.

An evolving Regional Action Plan for the countries of the EMME, and an organizational structure to underpin its efforts, have been tentatively agreed within the framework of two regional Ministerial Meetings that took place in February and June 2022, and are expected to be formalized following COP27 (November 2022). The EMME Regional Action Plan is a set of proposed projects and services, that was put together based on the work of thirteen thematic Task Forces comprised of over 240 scientists under the coordination of The Cyprus Institute. It places emphasis on transboundary measures aimed at ameliorating regional climate change effects and advancing relevant mitigation actions, in line with the Paris Agreement.

The EMME-CCI will be inaugurated by the heads of EMME states in Sharm el-Sheikh at COP27 (November 2022) at the invitation of T.E. presidents A.F. El-Sisi of Egypt and N. Anastasiades of Cyprus.

CLIMATE CRISIS IN THE EMME REGION: A GLOBAL THREAT

The 450 million inhabitants of the eighteen countries comprising the EMME region are at risk of a 5°C increase in mean annual temperature by the end of the century, under a “business as usual” scenario. This will lead to a catastrophe of unprecedented scale, inducing social collapse and mass migration, unless immediate action is taken on mitigation and adaptation through strong regional cooperation.

The EMME-CCI initiative has a dual goal, namely, to initiate or enhance:

In two regional ministerial meetings, a Governance scheme comprising a Governing Council, the Initiative Secretariat and National Climate Offices has been developed and it is expected to be further refined and developed in the coming months. Extensive reports produced by the thirteen scientific thematic Task Forces, which include a plethora of proposed adaptation and mitigation measures, have been published and made available to country authorities.

The recommendations of the Task Forces provided the basis for the proposed evolving Regional Action Plan.

The program and work plan are characterized by inclusiveness. The expanding bi-lateral, tri-lateral and multi-lateral initiatives of the Cyprus Government along with the international initiatives and organizations are being used and engaged maximally towards achieving success in this initiative.

The complexity, diversity and varying development of the countries of the region present both a challenge and an opportunity, which will be taken into account.

WHY FOCUS ON THE EASTERN MEDITERANNEAN & MIDDLE EAST REGION

A new study shows that Severe Atmospheric Pollution in the Middle East, Detrimental to Health and the Climate, is Attributable to Human-made Sources.  Recent studies from prominent institutions, including the Intergovernmental Panel on Climate Change, have classified the Eastern Mediterranean & Middle East (EMME) region as a global climate change “hotspot” with particularly high vulnerability to climate change impacts. Overall warming of up to 5°C in this century is projected for the Eastern Mediterranean and the Middle East.

“Climate Change and Weather Extremes in the Eastern Mediterranean and Middle East”- “Reviews of Geophysics”, 28/6/2022 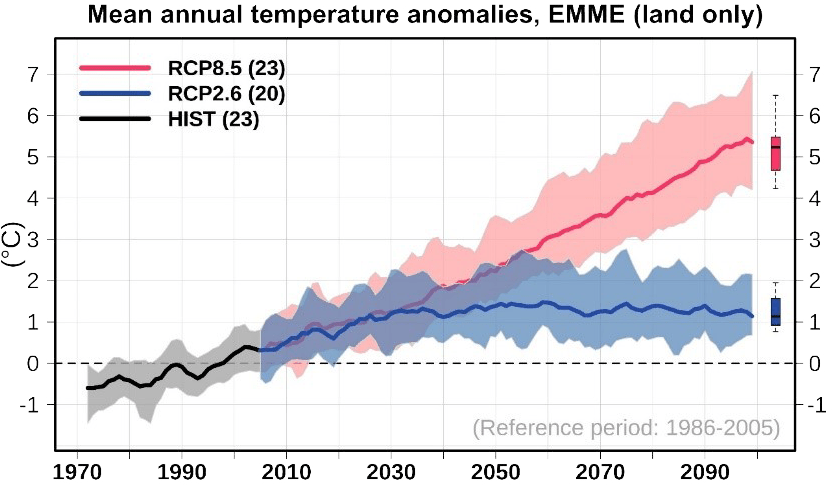 “under a business-as-usual scenario, by the end of the century the coolest years will be significantly warmer than the warmest years of the reference period”

“the EMME region will be subjected to unprecedented heat extremes”

The EMME region is already facing adverse effects such as heat waves, droughts and atmospheric dust storms which are only due to intensify in the coming decades. Without proper mitigation and adaptation actions, these harmful effects could soon lead to intolerable environmental conditions, ultimately forcing mass migration for the c. 500 million people living in the region. This is expected to have devastating implications for the EMME and the planet.

EMME is also a region with a complex geopolitical landscape, that historically has had limited dedicated scientific resources for climate research, which further adds to the challenge and urgency for concerted climate action in the region.