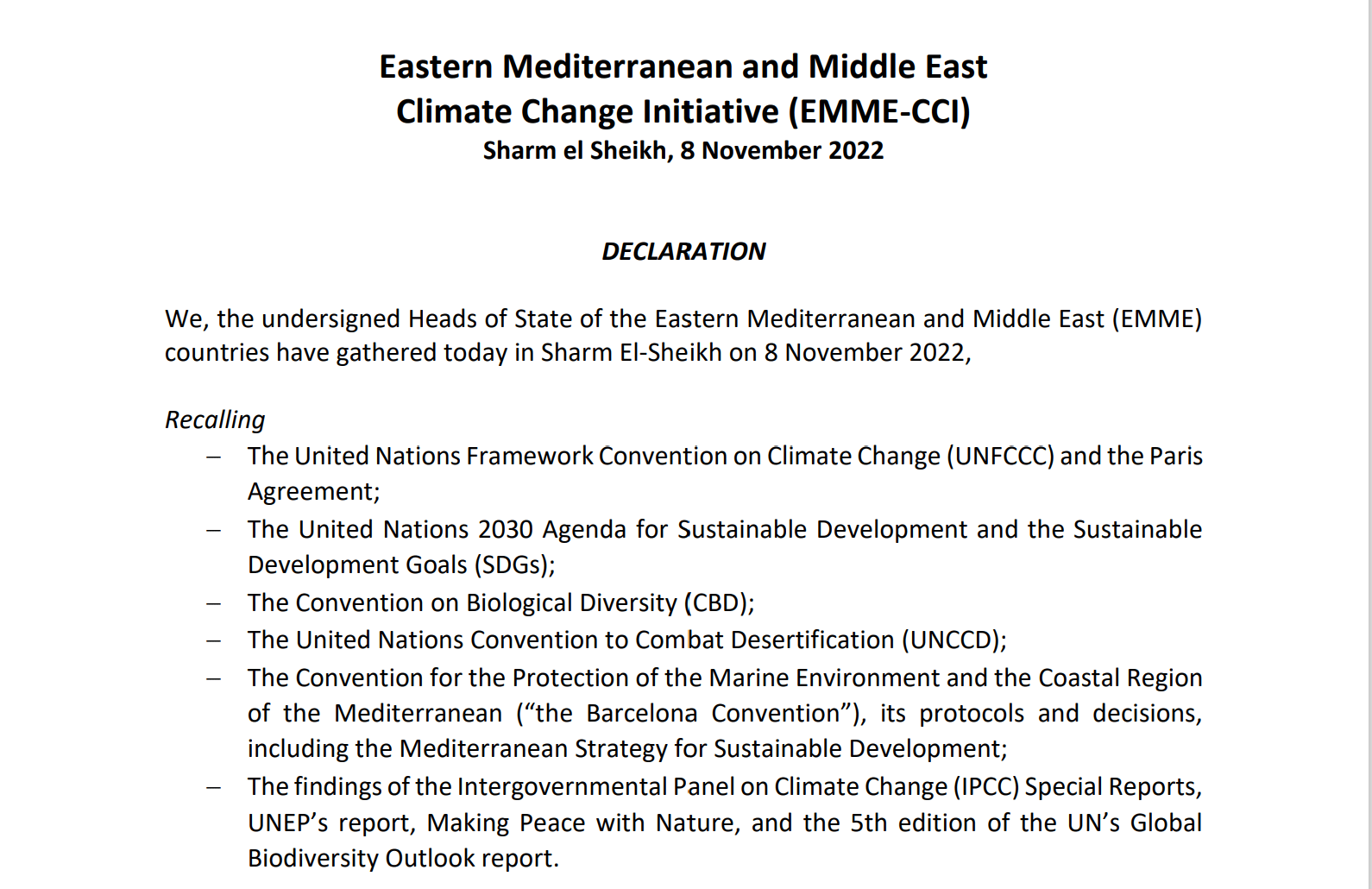 Ten countries of the Eastern Mediterranean and Middle East (EMME) region adopted a declaration  to officially launch the EMME Climate Change Initiative (EMME-CCI). The accomplishment of this historic milestone in the race to address the climate crisis was announced at a Summit that took place on 8 November 2022 as a sideline event at COP27, in Sharm El Sheikh, Egypt.

The EMME-CCI Declaration was adopted by Bahrain, Cyprus, Egypt, Greece, Iraq, Israel, Jordan, Lebanon, Oman, and the State of Palestine.

The Summit was co-hosted by the President of the Republic of Cyprus, Mr Nicos Anastasiades and the President of Egypt, Mr Abdel Fatah el Sisi, and was attended by heads of state or government and other high-ranking government officials and organization representatives. 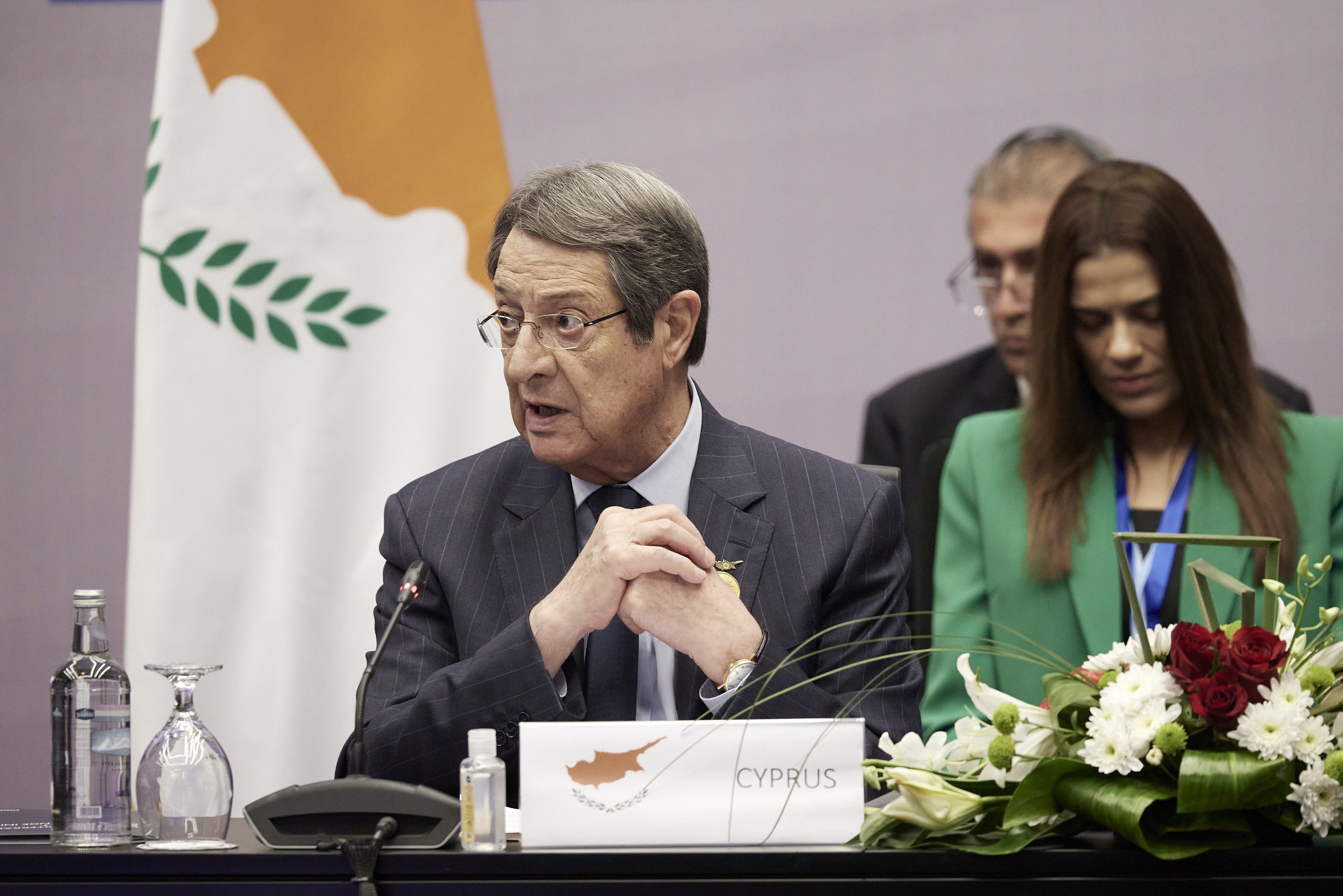 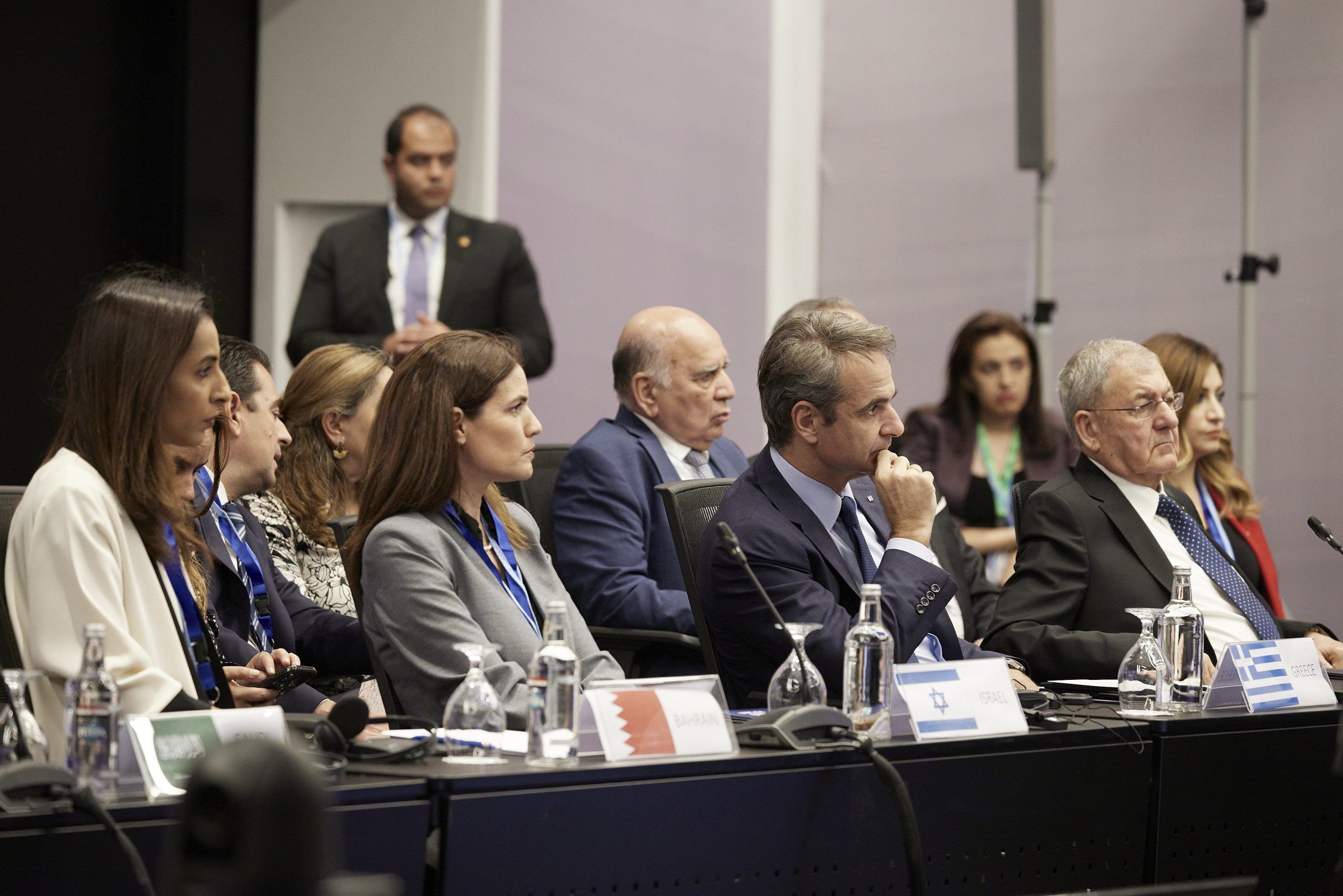 The adoption of the Political Declaration earmarks the official launch of the Initiative which has been undertaken by Cyprus since 2019. It constitutes a historic milestone for the region’s resilience and prosperity, as it notes the willingness of the undersigned countries to act in a coordinated way to achieve concerted action for the mitigation and adaptation of the climate crisis in the EMME.

Speaking at the event, President Anastasiades warmly thanked President el-Sisi for hosting and co-organizing the sideline Summit and welcomed participants for the adoption of the EMME-CCI. He stressed that their presence at the Summit is indicative of the collective determination to address the dire effects of climate change in the EMME and that through the scientific work that has been made available through the EMME-CCI, countries of the region now have a better understanding of how the crisis will unfold in the near future, and which actions to implement to address it.

On his part, the President of Egypt, speaking through an interpreter said, among other things, that Egypt was very eager to participate in this initiative, adding that the EMME region is a climate change hot spot with consequences at all levels. He added that the initiative is a major global mechanism when it comes to actions to deal with the impact of climate change. He noted the Importance of such initiatives, pointing out that the scientific component this initiative includes is indispensable. Concluding he said that he looks forward to learning more about the initiative and the actions it includes, noting the common interests and collaboration between Cyprus and Egypt.

The Minister of Agriculture, Rural Development and the Environment Mr Costas Kadis, and the Presidential Envoy of Cyprus on Climate Change, Prof Costas Pananicolas, made presentations on the Cyprus initiative, and its policies and actions, respectively.

Following the adoption of the declaration, the focus of the EMME-CCI remains firmly on the coordination of transboundary mitigation and adaptation activities towards the goals of the Paris Agreement, and a safer future for the people of the EMME region.

More information about the Summit in the 8/11/2022  Press Release  of the Cyprus Government Press and Information Office  .

PRESENTATION OF THE EMME-CCI INITIATIVE AT THE SUMMIT

Mr Costas Kadis, Minister of Agriculture, Rural Development and Environment, presented the EMME-CCI and reiterated its message that “only by acting collectively, decisively and based on sound scientific knowledge can we avoid the worst consequences of climate change in our region”. (Please find  the presentation here)

Respectively, Prof Costas N Papanicolas, Presidential Special Envoy for Climate Change, and President of The Cyprus Institute presented the EMME-CCI Regional Action Plan, which contains recommendations for working towards technologically mature and affordable solutions for addressing the impacts of climate change in different sectors, based on the findings of the 240 scientists that worked to form the basis upon the Plan was developed, under the coordination of the Cyprus Institute. (Please find the  presentation here) 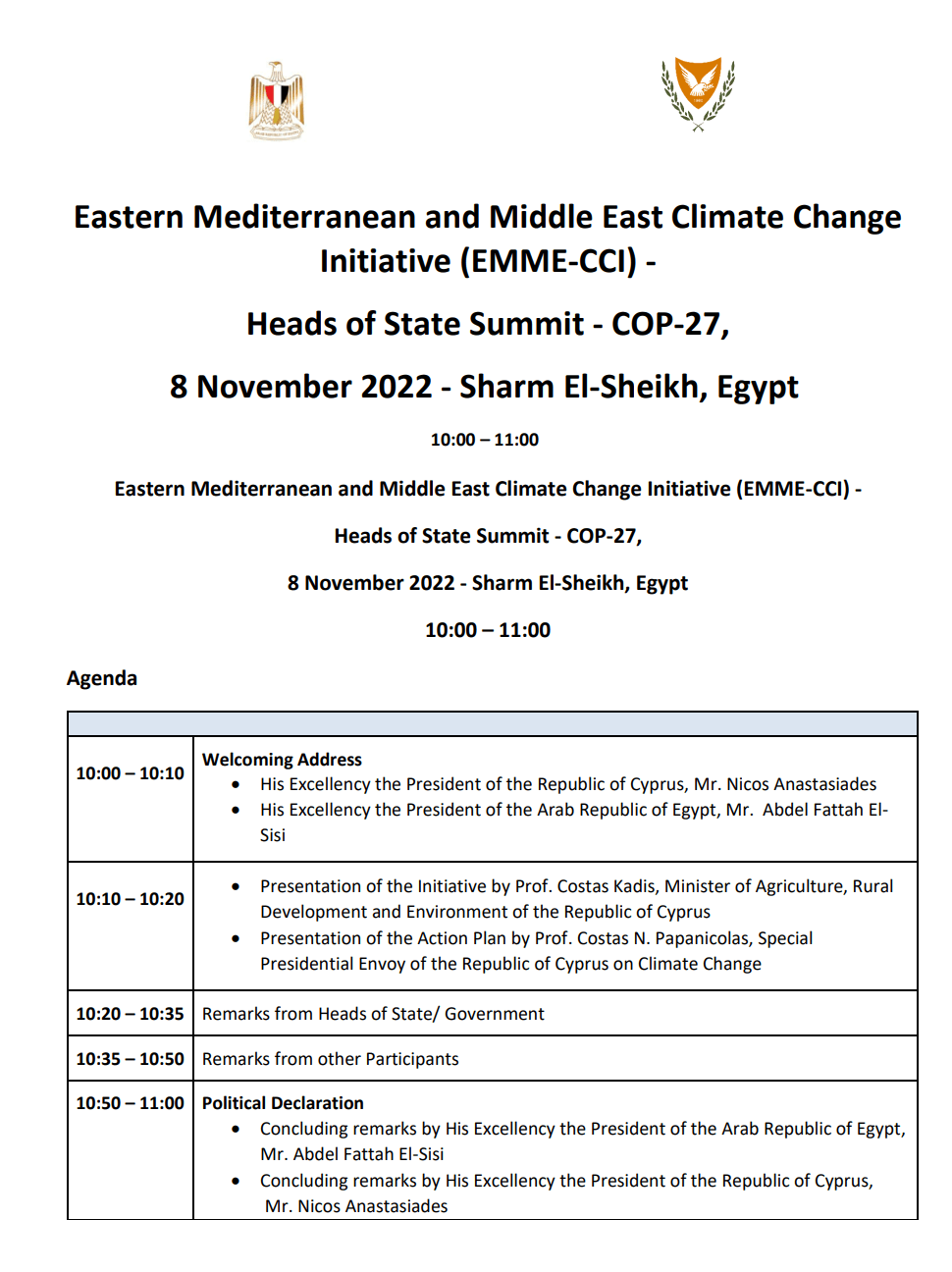 Intervention by the President of the Republic Mr Nicos Anastasiades at the COP27, in Sharm el Sheikh

Intervention by the President of the Arab Republic of Egypt, Mr. Abdel Fattah El-Sisi at the COP27, in Sharm el Sheikh